We’re thrilled to announce the first of our initiatives here at Circa Theatre: Lockdown Live!

Every Wednesday at 11am on Facebook, you’ll be able to experience life with a different artist that has links with Circa.

Get a snapshot of their lockdown life and tips for what’s getting them through. They might discuss their passions, inspirations, share a poem, play a song or simply chat.

Every Lockdown Live is different and we’re keen to give it over to the artists with how they want to greet us.

Lockdown Live will run 10-30 minutes and we invite viewers to tune in and ask questions.

Circa Theatre and TACT are proud to be supporting artists with these initiatives in this financially difficult time. 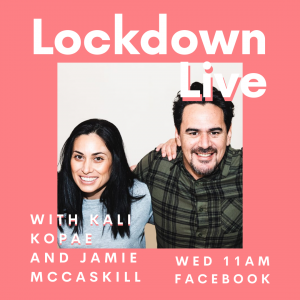 Hold onto your hats for the next Lockdown Live because it’s a double bill: Kali Kopae and Jamie McCaskill!

Don’t forget to catch them Wednesday 11am right here on Facebook.

A power couple for the ages, Kali and Jamie have been collaborating together forever, from love and music in He Reo Aroha with Tawata Productions, to their work as Tikapa Productions with their world premiere of Manawa in Circa Two and their international smash hit Not In Our Neighbourhood (Best new New Zealand Play, WTA) which toured to the Edinburgh Fringe.

You would’ve caught plenty of them in their own work too. Seen most recently as Aria Robson in Burn Her, Kali Kopae is a Circa regular, starring in The Beautiful Ones, as Frida Kahlo in La Casa Azul and Christine in A Doll’s House which she toured nationwide. She’s also performed with The Beatgirls for years and some of her TV credits include The Deadlands TV series and Awa Films Colonial Combat.

Jamie has toured nationally and internationally as an actor, most recently as a member of Modern Māori Quartet. An award-winning playwright, Jamie was awarded the Bruce Mason Award in 2013 for his dynamic play Manawa and his play Not in our Neighbourhood was awarded Best new New Zealand Play at the Wellington Theatre Awards in 2015. Jamie is a founding member and director of The Māori Sidesteps and has recently joined the Circa Council.
Catch them live on Facebook, Wednesday 29th April at 11am!
www.facebook.com/CircaTheatre
📸Roc Photography
PREVIOUS GUEST ARTISTS: 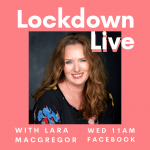 On Wednesday 22nd April at 11am right here on Facebook, we’ve got our latest Lockdown Live with the incredible Lara Macgregor! Read about her below and see you on Wednesday.
Lara works primarily as an actor, director, dramaturg and performance coach in New Zealand. She studied acting in New York City with Uta Hagen, Anthony Abeson and Tony Greco and subsequently worked for ten years as an actor in the U.S.
She holds a Post-Graduate Diploma in Directing from The National Institute of Dramatic Art in Sydney and has directed over 40 productions throughout America, Australia and New Zealand.
In 2009, Lara was appointed Associate Artistic Director at The Court Theatre in Christchurch, and, in 2010 went on to become Artistic Director in 2010 at Fortune Theatre in Dunedin. Her directing highlights include Red; In the Next Room (or the vibrator play); Play; Tribes; Souvenir; The Caretaker; Punk Rock; Time Stands Still and The Curious Incident of the Dog in the Night-Time.
Since 2015 she has freelanced with multiple companies including Auckland Theatre Company, Circa Theatre, Centrepoint Theatre, South Pacific Pictures, The Actors’ Program and University of Otago Theatre Studies.
On stage, most recent performances include; Lauren Grant in Burn Her at Circa and Annie Wilkes in Stephen King’s Misery alongside Gavin Rutherford at The Court Theatre. Her 2020 performance credits include; Sgt Gillian Carmichael in the Netlfix series Clickbait, Judy in the feature film This Town, the Headmaster in the Amazon series The Wilds, and she was scheduled to appear in the 2020 Circa Season as Fran in Things I Know To Be True and Di in Di and Viv and Rose. 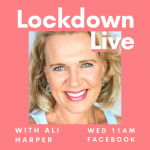 We’re so excited to announce that our next Lockdown Live artist is Ali Harper!

Ali Harper wears many hats! Singer, Actor, Mother, Producer, Writer, Yoga Teacher and Grandmother. Her one woman shows have graced the Circa stages over recent years such as ‘A Doris Day Special,’ ‘Legendary Divas,’ ‘Songs for Nobodies’ and her latest show ‘The Look of Love’ celebrating the music of Burt Bacharach was supposed to be playing at Circa right now.

While in lockdown brighten your day and join the very colourful Ali from her home in Christchurch on Lockdown Live, right here on Facebook on Wednesday 15th April, 11am! 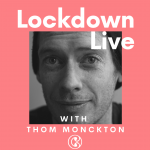 Our first guest is Thom Monckton, whose work at Circa has included The Pianist and The Artist, the latter of which was originally scheduled to be currently onstage.

We’re thrilled Thom can join us in the digital world and you can too, Wednesday 8th April 11am on Facebook Live!

Thom grew up in Patea, went to circus school in Christchurch, studied physical theatre in Paris, and is now loosely based in Helsinki. He is the co-artistic director of Kallo Collective, a Finnish performance company specialising in physical comedy and working predominantly with circus artists.