Look behind the curtains!
Duration:
Location: An exclusive behind-the-scenes look at Circa Theatre!
Price: Free 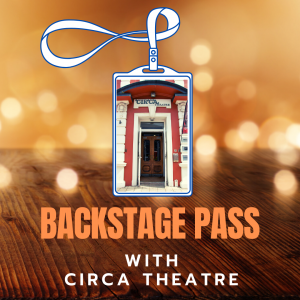 Each month Circa Theatre will be giving you a look behind the curtain with ‘Backstage Pass’.

You’ll get the chance to experience a little hidden slice of Circa that you wouldn’t usually see, presented by someone who works there.

We’ve got props, sets, posters, pictures, knick knacks, do-daddys, nooks and crannies. Even if we’re not open to the public just yet, we want to give you an exclusive behind-the-scenes look with ‘Backstage Pass’

Available on all of our social media channels.

A Queen would be nothing without her props so we’re pleased to announce that our very first Backstage Pass will be Eric Gardiner, Stage Manager and Props Master of numerous Circa Theatre shows, including his iconic appearances in many a Pantomime!
Arriving to NZ in 1964, Eric began stage managing his first show in that year, having no experience in theatre. He worked with amateur dramatic companies, stage managing and acting until 1982 before he moved to Wellington and worked at the iconic Downstage Theatre. He was SM there for 15 years. He finished as Tech Manager, and left in 1996 to freelance for a while. Then he moved to Circa and has been there ever since stage managing. All up, he’s been stage managing for 56 years!