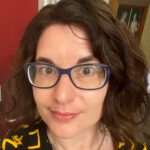 Chrissy Boulton joined us in January 2022 as our new Philanthropy and Partnerships Manager. Chrissy runs our fundraising campaigns, builds and maintains relationships with supporters of the arts, and works closely with the Circa Council to identify ways in which Circa can grow. If you’ve been thinking of giving generously to Circa Theatre reach out to Chrissy!

Chrissy is originally from the UK and has a BA Hons in English Language and Literature. She’s a big fan of the performing arts and has been involved in many amateur productions over the years, usually behind the scenes with the occasional (but not preferred) appearance on stage.

Having been on the NZ fundraising scene for nearly 6 years, largely in tertiary education fundraising, Chrissy is excited to bring her experience and training to raise funds for Circa. In her spare time, she enjoys fiction writing and volunteering with local community groups.