Stage Kiss had a total of 37 onstage kisses most of which are done between the two main characters “He” and “She.”

We decided to have a little look at Kisses over time and here were the top kisses that stuck out in our mind as the most memorable.

Who could forget this Iconic movie kiss with possible one of the most iconic film lines in history!

Remember the rain, it appears often with movie kisses. This heated upside down spider-man kiss cannot be left off our list! This kiss has been paradies and ripped off time and time again but the original is timeless. On The Streets of Vancouver

A young couple unknowingly became the image of the 2011 riots in Vancouver, when thousands of ice hockey fans took to the streets after the city’s team lost the season-ending Stanley Cup Final.

But it seems the moment when the couple lay down in the middle of the street and shared a passionate kiss as riot police shut off the street was not a fleeting moment.

The couple are still together today and are living together in Australia.

Scott Jones, from Perth, and his Canadian girlfriend Alexandra Thomas were photographed locked in a passionate kiss on the ground while surrounded by baton-wielding officers. A beautiful metphor of love even during tiems of mayhem. Lady and the Tramp

Another iconic movie moment and probably one of the cutest so far! This amazing spaghetti scene has defiantly been recreated several times to varying degrees of success including by the second film!

We never knew that dog’s could be so cute!

May be one of the most recognizable photos of the kiss: a sailor and a young nurse in Times Square, after the date of Japan in 1945. Joyful moment on camera filmed the photographer Alfred Eyzenshtedt. In 1950, French photographer Robert Doisneau made his most famous picture: the image of a couple kissing on a busy street in Paris. The picture has become an international symbol of young love in Paris.

Something about Black and White makes images look so much nicer! 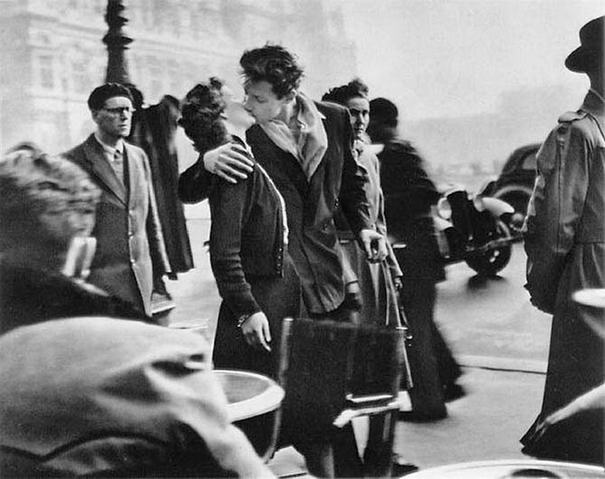 Another iconic rain kiss scene. The rain seems to make everything more dramatic!

In honor of the 30th anniversary of the German Democratic Republic in 1979, Soviet leader Leonid Brezhnev and East German President Erich Honecker shared a “fraternal kiss” an expression of solidarity exchanged between Eastern Bloc pols when the Soviet Union existed.

Barack and Michelle Obama are pros at posing for the cameras, yet they did not expect to appear on the “Kiss Cam” at the Verizon Center in Washington, D.C. during an Olympic men’s exhibition basketball game between Team USA and Brazil on July 16, 2012. The first couple did not kiss when the camera zoomed in on them during the first half of the game. But when it came around in the second half, the President kissed the First Lady so passionately that NBC’s Al Roker joked, “Mr. President, get a stadium!”